~In a case-control study conducted in 641 men with low-risk cancers who underwent prostatectomy at UCSF or the University of Washington, GEMCaP, a validated, DNA based biomarker for prostate cancer risk assessment was shown to add independent information to a commercially available RNA risk biomarker to help predict outcomes after prostatectomy. GEMCaP, but not the RNA biomarker, was a statistically significant predictor of major upgrading (p = 0.02) between biopsy and surgery.

In a multivariable model for recurrence among a subset of the men with organ-confined, negative margin prostate cancer (N=172), a GEMCaP score of 0 was highly protective (p = 0.02) and the negative predictive value (NPV) for recurrence was 96%. If validated, a test like this that would allow men to avoid prolonged disease surveillance after surgery would have great value in terms of reducing anxiety and cost.

Overall this study points to the value of including a DNA based risk assessment to provide a more refined understanding of a given cancer’s biology, allowing management decisions to be further tailored, facilitating decisions not only about active surveillance versus treatment, but also about timing and intensity of either surveillance and/or treatment.

~ We found a high incidence of CTC detection after radical prostatectomy and shorter time to biochemical recurrence in those with higher CTC burden and more CTC copy number aberrations. With further testing, CTC detection could be an informative biomarker to assist with adjuvant treatment decisions.

~This paper demonstrated CD46 is an excellent target for antibody-based therapy development. Our lab’s research in this publication related to demonstrating CD46 could be detected on the surface of circulating tumor cells and thus could be a companion diagnostic for patients with metastastic castration resistant prostate cancer (mCRPC) considering treatment with a CD46 antibody-based therapy.

~This paper concluded that increasing the dose of abiraterone at the time of resistance has limited clinical utility. Our lab’s role within the framework of this study was demonstrating that lower circulating tumor cell burden was associated with response to standard-dose therapy.

~ Patients with muscle-invasive bladder cancer (MIBC) have poorer prognoses if the cancer has metastasized to the lymph nodes. Genomic markers of lymph node involvement would be useful for treatment planning.  Thus, we performed a genome-wide query of copy number alterations in MIBC and found gains on chr3p25 or chr11p11 remained significantly associated with lymph node involvement.

This paper reports on an NIH R01 funded study to validate the GEMCaP biomarker set.  GEMCaP (Genomic Evaluators of Metastatic Prostate Cancer), discovered as part of an NIH funded prostate cancer SPORE project, is a suite of DNA-based biomarkers associated with prostate cancer recurrence and metastasis.  In the current study, a high GEMCaP score was associated with biochemical recurrence in two external cohorts (Cleveland Clinic and Rochester). This remained true after adjusting for clinical and pathologic factors.  The GEMCaP biomarker could be an efficient and effective clinical risk assessment tool to identify prostate cancer patients for early adjuvant therapy. Great job Drs. Hao Nguyen, Chris Welty and Karla Lindquist!

The link to the online version of the paper is here:

This was a multi-discipline collaboration with Drs. Rahul Aggarwal (Med Onc-GU)and Mike Evans (Radiology) at UCSF. The online version of the paper, published in June, addresses if Ga-citrate can be used to detect prostate cancer tumors overexpressing MYC. Our laboratory explored whether MYC could be assessed in the circulation of patients with advanced prostate cancer (mCRPC) using a simple blood draw. The Ga-transferrin imaging results were compared to the cell free (cf) DNA results obtained from the same patients.  cfDNA seems to be a viable way to non-invasively evaluate patients for their MYC tumor status. Down the line, these could be used as fairly non-invasive biomarkers to determine if a patient is a good candidate for a drug that targets this pathway.

The link to the online version of the paper: 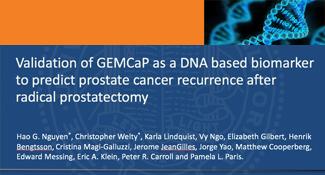 Hao Nguyen, MD, PhD, Assistant Professor, Department of Urology presented an abstract to the AUA meeting and it was selected as a talk in the Biomarker session at AUA 2017 in Boston.  The topic was: Validation of GEMCaP as a DNA based biomarker to predict prostate cancer recurrence after radical prostatectomy. 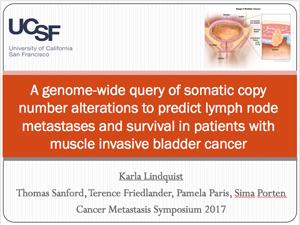 Lab member, Karla Lindquist submitted an abstract for a meeting, Cancer Metastasis through the Lymphovascular System: Biology & Treatment, 7th International Symposium, held last week in San Francisco.  Her abstract was selected not only as a poster but also as a talk!  And, she won a best talk award at the meeting!

Fall 2016:
New paper published in BMC Cancer.
This paper reports on the ability to detect PD-L1 expression successfully on circulating tumor cells of patients with muscle-invasive and metastatic bladder cancer consistently. Genomic analysis of these CTCs support their tumor origin. This demonstrates the ability to detect PD-L1 on tumor cells through a minimally invasive process and holds the potential to guide checkpoint inhibitor immune therapies established to have activity in this patient population.
Read More
______________

October 2014:
The October 2014 issue of The American Journal of Pathology showcased research from the Paris lab and collaborators from the National Institute of Health.
Read More
______________