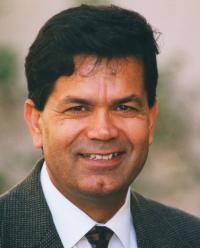 Rajvir Dahiya received his PhD in the field of Experimental Medicine and Biochemistry from the Post Graduate Institute of Medical Education and Research in Chandigarh, India. He completed four years of post-doctoral fellowship training in oncology and molecular biology at the University of Chicago Pritzker School of Medicine in Chicago, IL. Dahiya joined the University of California, San Francisco (UCSF) School of Medicine in 1987 as a scientist located at the San Francisco Veterans Affairs Medical Center (VAMC). He became director of the UCSF/VAMC Urology Research Center in 1991.

Dr. Dahiya is a scientific reviewer and chairman for the United States Army Department of Defense’s (DOD) medical research programs in prostate, breast and ovarian cancer. He is a member and chairman of scientific review committees for the National Institutes of Health (NIH) including the National Cancer Institute (NCI), the National Institutes of Digestive Diseases and Kidney (NIDDK) and the National Institute of Aging (NIA). As a committee member and chairman, he reviews scientific progress and future plans for comprehensive cancer center programs, the George O’Brien Research Center, the NCI funded Specialized Program for Research Excellence (SPORE); postdoctoral fellow training programs; program projects related to oncology and research projects related to urologic oncology. Dahiya is a medical research advisor and scientific reviewer for numerous international programs and universities including institutions located in Europe, Israel, Japan Korea and Brazil.

Dr. Dahiya is the President of the Society of American Asian Scientists in Cancer Research and the International Cancer Research Association. The members of these associations are medical scientists from North America, South America, Europe and Asia. The associations convene to discuss the latest medical science discoveries, exchange novel ideas and foster collaboration in the field of cancer prevention, early diagnosis, prognosis and cancer treatment through novel strategies.

Dr. Dahiya has published over 350 original research manuscripts in national and international journals. He has written chapters in books and holds multiple oncology patents. Dahiya has a long-standing interest in molecular genetic targets as novel biomarkers for the early diagnosis and prognosis of urological malignancies.

The main goal of this project is to investigate the genetic basis of prostate cancer health disparities. The rationale is that prostate cancer is the leading cancer among men of African descent in the USA. A substantial proportion of African American men have a higher overall incidence, earlier age of onset, increased proportion of clinically advanced disease and increased bone metastases and mortality from prostate cancer compared to Caucasians. Based on our preliminary data, we hypothesize that the differential expression profile of a set of oncogenic miRNAs and tumor suppressor miRNAs in African Americans may target a set of prostate cancer specific genes and may contribute to the prostate cancer health disparity in African Americans. The molecular mechanisms of action of tumor suppressor miRNAs are through repressing oncogenes and activating tumor suppressor genes. We will test these hypotheses through analyses of a series of experiments proposed under our specific aims. All the aims are highly focused, centralized, innovative, clinically significant, functional and mechanistic in nature.

The main goal of this project is to investigate the role of miRNAs in targeting c-Myc/HIF pathway and thus suppress kidney cancer progression and metastasis using both in vitro and in vivo models. Accomplishment of this project will be a significant step forward in understanding miRNA-mediated suppression of c-Myc/HIF pathway and designing novel miRNA-based therapeutic strategies for inhibition of progression and metastasis of kidney cancer among our Veterans.

MicroRNAs in the progression and metastasis of prostate cancer.  NIH / NCI-RO1CA138642

Dahiya will test the hypothesis that down-regulation of a set of microRNAs can inhibit tumor suppressor genes or activate oncogenes and re-expression of these miRNAs can reverse these effects thereby regulating prostate cancer progression. Read more ....

The main goal of this project is to investigate whether dietary isoflavones such as genistein can inhibit prostate cancer growth through activation of tumor suppressor microRNAs (miRNAs) using both in vitro and in vivo models. Dahiya hypothesize that genistein can activate a set of tumor suppressor miRNAs thereby inhibiting prostate cancer progression through two different pathways. Read more ....

This proposal seeks continuation of our unique program in academic urology, which provides intensive training in urological research to postdoctoral fellows. Read more ....

The main goal of this project is to investigate the role of Wnt antagonist genes in the progression and metastasis of renal cancer. Wnt signaling pathways control cell proliferation and differentiation during development, and when deregulated, modulate malignant transformation in various organs.
Read more ....

Center for Excellent “Role of genetic biomarkers in clinical assessment of prostate cancer”.
Program project funded by the Department of Veterans affairs.

The overall goal of this project is to utilize genetic biomarkers that can identify which localized prostate tumors are likely to progress, metastasize, or become fatal, and thus require more aggressive clinical intervention. Read more ....