A UCSF database that has helped transform the diagnosis and treatment of prostate cancer marks its 20th anniversary this year. Since its inception, the Cancer of the Prostate Strategic Urologic Research Endeavor (CaPSURE) has tracked more than 15,000 men, who complete annual surveys on treatment, side effects and quality of life. To date, that rich trove of data has been analyzed and shared in more than 179 published papers on topics ranging from diet and exercise to continence and sexual function.

CaPSURE was one of the first observational databases in urologic oncology when it was established in 1995.  Then as now, prostate cancer ranks as the second most frequent cancer in men behind lung cancer, with 250,000 new cases diagnosed each year.  Long-term survival following a diagnosis is common, and there is no definitive treatment for the disease. In CaPSURE, physicians have found a way to use patient feedback to help sort through the best treatment options for each individual.

The ambitious project was initially launched by TAP Pharmaceuticals, manufacturer of a drug used in hormone therapy for prostate cancer. UCSF urologist and current department chair Peter R. Carroll, MD, MPH, chaired the advisory committee on the project, which included academic and community-based urologists. The database transitioned to UCSF in 1999, and in 2006 TAP gifted all intellectual property associated with the study to UCSF.

Jeanette Broering, RN, PhD, MPH, who directs data operations and quality assurance for the Department of Urology, currently manages the CaPSURE registry. A co-principal investigator of CaPSURE, she has been involved with the project for 19 of its 20 years. As a nurse researcher with training in epidemiology, biostatistics and quality improvement, she oversees design and distribution of an annual survey that is sent to all participants. She also manages a team that enters and analyzes the data patients provide as well as additional information obtained from their treating physicians.

“At the time it was started, this was a relatively new idea—to ask patients to describe what happens in the real world, when people live with chronic disease,” said Broering.

Part of Broering’s job was to bring urology practices on board with the idea of participating in a patient registry, and she recalls that convincing physicians of the value of patient-reported metrics was difficult.

“Now there is a lot of emphasis on patient registration, but in the mid-1990s, it was a fairly new concept,” she said.

Participation grew when it became apparent that, with the FDA approval of the PSA test in 1989, many more men were being treated at an early stage for prostate cancer. CaPSURE patient reports quickly revealed the many quality of life effects that men were living with as a result of treatment, including erectile dysfunction, urinary incontinence and bowel symptoms.

To date, CaPSURE has enrolled 15,100 patients through 43 community urology practices, academic medical centers, and VA hospitals located in 27 states. CaPSURE collects data from three sources: patient surveys, which are completed in English or Spanish; the treating urologist, who completes a survey following initial treatment and during subsequent visits; and administrative records, such as hospital admission and death records.

Patient surveys were initially administered several times a year, but are now conducted on an annual basis. Broering oversees four full-time research associates who enter and retrieve participant-reported and clinician-reported data.  She also supervises three biostatistical programmer analysts who manage the libraries of software code that help sort the data so that it can be analyzed for publication. 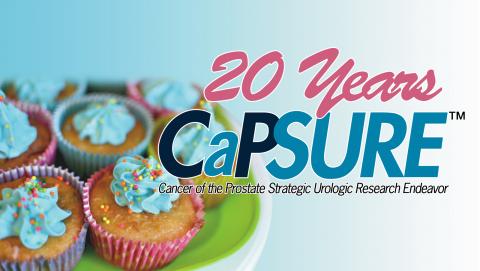 A window in time

CaPSURE has provided a way to track how treatment trends diffuse throughout the country over time, said Broering. For example, active surveillance, initially called watchful waiting, was in its infancy as a treatment choice when CaPSURE began.  Now it is well established as an option for men who are at low risk for metastatic disease.

Over its lifespan, the project has also reflected the evolution of technology.  In 1995, sites sent paper case-report forms to the data coordinating center.  In 1999, sites entered data through a dial-up Internet link and modem, something that was frustratingly slow in many parts of the country, said Broering. The project now uses a secure web-based software that can be rapidly accessed by most participants. However, “snail mail” is still preferred by about 2,600 CaPSURE participants, the oldest of whom is now 104 years old.

Training the next generation of researchers

With an eye on the next generation of physician scientists, UCSF Urology created the CaPSURE scholars program to support health services research. Since 2003, 55 young physicians, psychologists, epidemiologists, and health services researchers from around the United States have participated. These junior scientists propose a research idea, which is carried out though the CaPSURE registry with the assistance of a local mentor and a UCSF scientist.

CaPSURE continues its work today with funding from a variety of sources, including a Department of Defense grant.  In the wake of CaPSURE’s successes, large national-level registries are being developed, such as the American Urological Association Quality Registry (AQUA), which will track a wide range of issues in men’s urological health.

The many professionals involved in CaPSURE credit the patients themselves with its longevity. Most of the men enrolled in the project have remained loyal participants over time. The project produces an annual newsletter for participants, highlighting recently published CaPSURE studies that reflect their ongoing contribution.

“Men have really been committed to making sure the next generation benefits from their experience,” said Broering.