Home / News / The Promise and Perils of Targeted Cancer Therapy

The Promise and Perils of Targeted Cancer Therapy 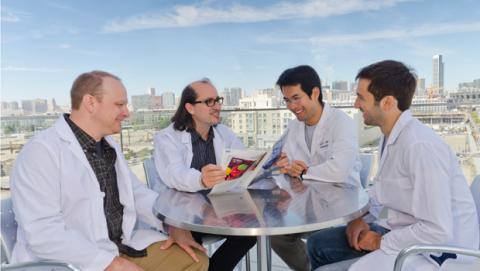 Dr Ruggero and his team of scientists reading Journal of Nature article At UCSF basic scientists and clinicians work in tandem to apply new knowledge as quickly as possible to the treatment of cancer patients. The process requires a constant back and forth as new ideas or hypotheses are generated, tested, revised, and retested.

One example is the recent work by UCSF faculty members on a signaling pathway that is active in 90 percent of cancers, including prostate cancer. The work focuses on mammalian target of rapamycin (mTOR), a protein involved in cellular metabolic processes such as protein synthesis regulation and growth control that is activated by a pathway referred to as the PI-3 kinase pathway. Researchers have known for many years that PI-3 kinase was activated by the loss of a tumor suppressor gene or “PTEN” in many prostate cancers.

It is only within the last decade that scientists have realized how they might de-activate the pathway through its link to mTOR, says medical oncologist Phillip Febbo, MD, director of the prostate cancer research program of the Helen Diller Family Comprehensive Cancer Center at UCSF.

Phillip Febbo, MD
Febbo, then at Harvard, worked with a team of scientists who found that treating mice with an inhibitor of mTOR returned precancerous prostate tissue displaying PI-3 kinase pathway activation to a normal state. This led to clinical trials of rapamycin and similar drugs in men with localized and metastatic prostate cancer. However, the drugs were found to be ineffective. “We went from enthusiasm in the animal model to disappointment in the clinical trial,” said Febbo. Tumor biopsies demonstrated that rapamycin-like drugs could inhibit at least part of mTOR activity, but that partial inhibition did not result in a meaningful clinical response.

Davide Ruggero, PhD, a basic scientist at UCSF and member of the prostate cancer research program, set to work to learn why rapamycin and related drugs were not working in prostate cancer. Ruggero’s expertise lies in exploring the mechanisms by which genetic mutations lead to cancer. He examines these mutations in mice to determine how they disrupt cells and promote cancer growth.  If a finding looks promising in mice and is confirmed in human tissue, his laboratory then identifies and tests compounds that can interfere with whatever mechanism is spurring cancer growth. When he examined the effect of rapamycin and rapamycin-like drugs in prostate cancer cells, Ruggero and his team found that these drugs do not fully block mTOR activity. In addition, both the Ruggero and Febbo laboratories have found that an oncogene called MYC, which is frequently expressed at high levels in prostate cancer, can limit inhibition of mTOR and prostate cancer’s sensitivity to rapamycin.

Working with Kevan Shokat, PhD, chair of cellular and molecular pharmacology at UCSF, Ruggero employed a new compound, known as PP242, which was able to completely block mTOR and abnormal protein synthesis in cancer. This discovery was featured as a cover story in the journal Cancer Cell (March 2010). Most recently, the Ruggero lab used this molecule and its clinical analogue, INK128, as well as a new technology to find out how mTOR controls the expression of specific proteins that turn human prostate cancer cells metastatic. 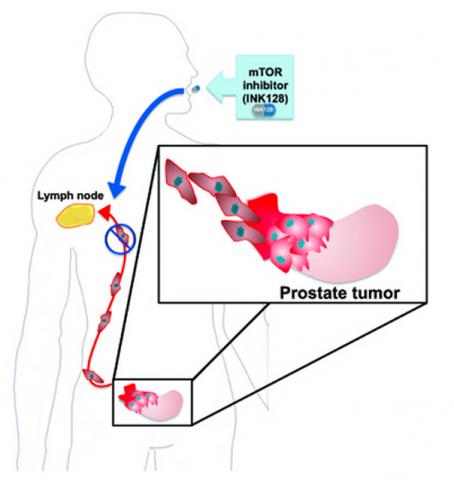 The striking results from this research were recently published in Nature (Feb. 2012). Ruggero and his colleagues identified the genetic players that instruct or execute decisions made by mTOR, and they discovered how mTOR deregulates one of the last stages of gene expression—when ribosomes translate genes into proteins. The research team used a method called ribosome profiling, which allows researchers to collect millions of ribosomes from inside cells and determine which genes they are turning into proteins. In their research, Ruggero found that mTOR increases the production of specific proteins that make prostate cancer cells become metastatic. Importantly, Ruggero and his colleagues showed that a mouse model of human prostate cancer treated with INK128 did not metastasize. They also showed that INK128 has a strong therapeutic effect on human prostate cancer cells as well as on metastatic cells derived from ovarian, breast and kidney tumors. Thus, the results from these experiments are widely applicable to many cancers.

The Ruggero lab also found that INK128 is more effective than other mTOR inhibitors, such as rapamycin, in restraining abnormal protein synthesis driven by mTOR. Deregulations in protein synthesis are a hallmark of cancer, and therefore targeting the aberrant protein synthesis apparatus in many cancers is an exciting new avenue for therapeutic intervention. The INK128 compound is currently being tested in Phase I/Phase II clinical trials, where it appears to be well tolerated, and will likely be further tested in men with metastatic prostate cancer, said Ruggero.

The combined work of Drs. Febbo, Shokat and Ruggero represents an important “learning loop,” where data are brought from the laboratory to the clinic and back to the laboratory.  This integration of laboratory and clinical efforts is only possible within a multidisciplinary program such as the UCSF prostate cancer research program–one that includes clinical, translational, and basic investigators.