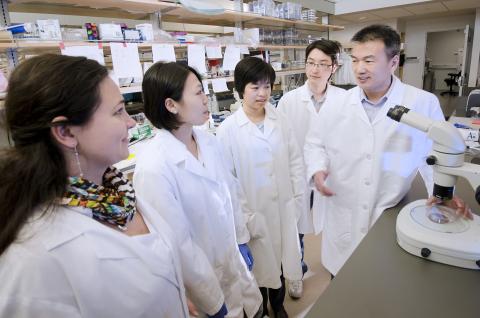 Although many patients respond well to initial surgical treatment for bladder cancer–the fifth most common cancer in the United States–tumors tend to recur. UCSF Urology scientist Long-Cheng Li, MD, and his team have published findings from a study in mice showing that delivering small activating RNA molecules (saRNAs) directly into the bladder can activate tumor suppressor genes and inhibit tumor growth. Over the last decade researchers in many fields have explored the ability of small RNA particles to inhibit genes that produce cancer-related proteins, but their use in activating tumor suppressor genes is a newer concept.

Li’s team targeted a variant of the p21 tumor suppressor gene known to be important in bladder cancer. They modified the saRNA to make it more stable when injected into the bladder and formulated the saRNA into a lipid nanoparticle to enable it to penetrate the protective cells that line the bladder.

When they evaluated the results of the treatment in mice with bladder cancer, they found that after 8 weeks, mice receiving the nanoparticle therapy had significantly prolonged survival when compared with controls. Four of the five treated mice showed tumor regression, and three eventually became tumor-free.

Li and his colleagues will seek funding for a clinical trial of the saRNA drug, which they believe could be a promising adjuvant treatment for patients after initial surgery. For additional details see Kang, MR, et al. Intravesical delivery of small activating RNA formulated into lipid nanoparticles inhibits orthotopic bladder tumor growth. Cancer Res. 2012 Oct 1;72(19):5069-79.