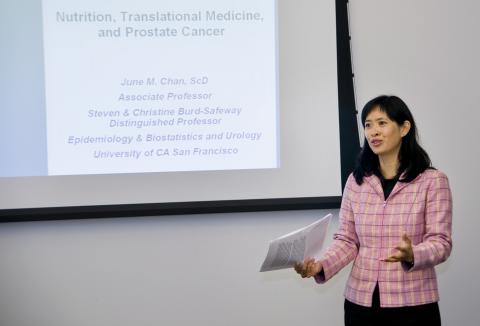 In the past 10 years, UCSF researchers have regularly collaborated with colleagues at Harvard University, exploring in tandem possible associations between prostate disease and specific behaviors. Investigators have worked with two cohorts in these studies:  a subset of the Harvard School of Public, Health Professionals Follow-up Study (HPFS), for which UCSF epidemiologist June Chan, ScD, who trained at Harvard, still serves as a co-investigator, and the UCSF Cancer of the Prostate Strategic Urologic Research Endeavor (CaPSURE) database.  These investigations have fostered the careers of several young faculty members, who have completed portions of their doctoral and postdoctoral work at each institution.   The Role of Diet and LifestyleHarvard and UCSF researchers Chan, Erin Richman, ScD, and Peter Carroll, MD, MPH have worked on several studies examining how lifestyle factors such as diet and smoking tobacco affect prostate cancer incidence, progression and recurrence.

• Researchers examined the effects of diet in approximately 1,300 men from the UCSF CaPSURE study. After two years of follow-up, researchers found that processed or unprocessed red meat, fish or skinless poultry was not associated with prostate cancer recurrence or progression, but consumption of eggs and poultry with skin may increase the risk.

• Chan and a team at UCSF and the Harvard-affiliated Dana-Farber Cancer Institute  looked at levels of selenium in the blood of men diagnosed with prostate cancer and found that variations in selenium metabolism and transport-related genes may affect the risk of having aggressive prostate cancer.  Prior observational studies, including studies that had measured selenium levels in the body, suggested that selenium might protect against prostate cancer. However, the large, national Selenium and Vitamin E Cancer Prevention Trial (SELECT) reported that supplemental selenium vs. placebo was not associated with risk of prostate cancer. Dr. Chan and colleagues from UCSF, the Harvard School of Public Health, and the Dana-Farber Cancer Institute are now collaborating with the Southwestern Oncology Group and investigators form SELECT to examine whether genetics might modify the effects of supplemental selenium and vitamin E on the risk of developing prostate cancer.