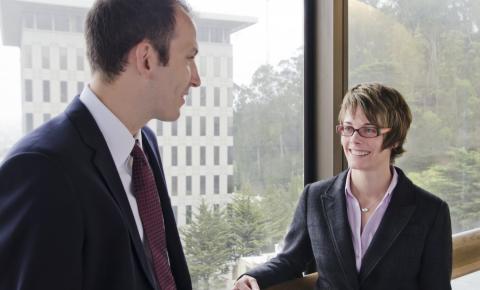 As an academic medical center, UCSF specializes in the care of complex medical conditions, many of them uncommon.  To look at urological health in a more general population, UCSF researchers have worked with Kaiser Permanente epidemiologist and professor of Urology Stephen Van Den Eeden, PhD, to evaluate data collected by this large health maintenance organization. Analyses have recently provided insight into two common health problems.

Urinary tract dilation, which may indicate an obstruction of the flow of urine from the kidneys to the bladder, appears on prenatal ultrasounds in from 1.5 to 8% of fetuses, and may persist in about 1 in 200 births. The condition often resolves on its own, and watchful waiting is usually recommended rather than immediate surgery.

The Prenatally-detected Urinary Tract Dilation (PNUT) study, which UCSF urologist Hillary Copp, MD, MS, developed in collaboration with Van Den Eeden, will look at the risks and benefits of antibiotic use in these children. It will analyze information in a mother and child electronic medical record database from the Northern California Kaiser Permanente Medical Care Program. With 30,000 births each year in the study group, an average of 300 patients with urinary tract dilation should be diagnosed annually. The study will provide clues as to which children are more likely to develop UTIs, whether antibiotic prophylaxis is helpful, and whether it is associated with treatment-resistant bacterial strains. Dr. Copp has organized this study as a scholar in the K12 Urologic Research (KURe) Career Development Program, which provides mentoring and research funding to young scientists investigating benign urologic diseases.

Lower urinary tract symptoms (LUTS), such as having to urinate frequently or urgently, become more common with age, and can negatively impact a person’s quality of life. LUTS has been associated with depression, falls and fractures, and increased mortality.  Billions of dollars are spent annually in the United States to treat the condition.

UCSF urologist and KURe scholar Benjamin N. Breyer, MD, MAS, is exploring the association between LUTS and human immunodeficiency virus  (HIV), a virus carried by more than 1 million Americans. Breyer conducted the first population-based study examining the association of HIV/AIDS and LUTS in men who have sex with men. His study included over 3,000 men who were reached by using novel social media techniques.

Breyer is now teaming with Van Den Eeden to examine  HIV/AIDS and LUTS in men enrolled in Kaiser Permanente, California.  Preliminary results from over 50,000 participants show that after adjusting for age, race/ethnicity, diabetes, smoking, and hypertension, being HIV-positive nearly doubled the odds that a man would report LUTS.  How HIV might increase the risk of LUTS is not clear. It may be that the virus directly affects the central or peripheral nervous system, or that symptoms arise from side effects of HIV treatment, opportunistic infections, or inflammation. By exploring disease epidemiology, the researchers aim to improve providers’ awareness and treatment of this important quality of life issue.