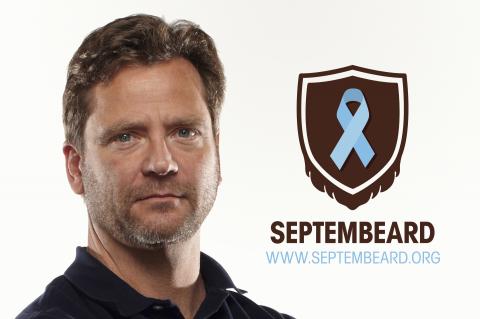 An unusual nonprofit that pairs growing a beard with raising money for prostate cancer research made a generous $55,000 donation to UCSF Urology this fall. The organization, Septembeard, was founded by sales and marketing executive Art Wagner to promote a fundraising event for men during September, prostate cancer awareness month.

A Bay Area resident, Wagner was diagnosed with prostate cancer in 2009 at a young age. He was successfully treated with surgery and radiation at UCSF, and a year later, hatched the idea for Septembeard.

“I was incredibly lucky to have Dr. Carroll and the UCSF team in my backyard,” said Wagner.  “But I thought about what I might do for those who don’t have resources like that in their communities.”

Wagner was well aware of how many men are affected by the prostate cancer—his father had been diagnosed with the disease, and Wagner worried about what the family history might mean for his own young son. He came up with an ambitious goal: to eradicate prostate cancer by raising funds for the best research programs in the United States.

That was in 2010, when the San Francisco Giants were in the World Series against the Texas Rangers. The frenzy that erupted around “the Beard,” Giant’s pitcher Brian Wilson, gave Wagner an idea for how he might raise money.

“Guys in general don’t like talking about something that will make them feel weak,” said Wagner, who at the time was augmenting his marketing background by studying for a master’s degree in counseling. Taking a cue from baseball, he set up the fundraiser so that men can form teams and compete within geographic divisions. "It has an element of fun and humor that makes men more comfortable," said Wagner.  Men sign up online and recruit donors to sponsor their beard, just as they would solicit sponsors for a run or a triathalon. Wagner drew on his experience in brand development, sales and marketing to develop the Septembeard website and garner media attention.  The organization has exceeded fundraising targets in both years of its existence, with $160,000 raised in 2011 and $260,00 in 2012.

When individuals donate, they can direct their gift to one of six top prostate cancer research programs.  In addition to UCSF, they include Johns Hopkins, Memorial Sloan-Kettering Cancer Center, MD Anderson Cancer Center, Mayo Clinic and Northwestern University.

Wagner is committed to building Septembeard into an organization that has a year-round presence. He appreciates all too well the need for continued research. This year, his fundraising team was named for his father, who died from prostate cancer in August.

“I'm a prostate cancer survivor. I don't want my son or anyone else's son to worry about this disease in the future,” he said.