Professor Jack McAninch has logged thousands of miles in the corridors of San Francisco General Hospital (SFGH) since he became urology chief there in 1977. Although he officially retired after 36 years in July 2013, his friendly face can still be found at this county medical center, where he pioneered many male urological reconstructive techniques and where he continues to serve on a consulting basis as a mentor teacher for UCSF trainees.

Working primarily with residents and fellows, McAninch relishes the chance to share his decades of clinical and research experience.  He also continues to conduct outcomes research. He created the SFGH-based genitourinary trauma database in 1977, which, with 4,000 cases, is now the largest of its kind in the world.  This resource, along with the genitourinary reconstruction database he started in the 1980s, remains a valuable research tool. 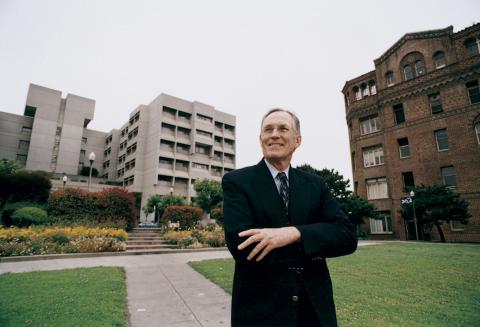 But McAninch has particularly relished his role as teacher. Since 1989 he has trained one fellow each year in male genitourinary trauma and reconstruction, sharing his expertise in the operating room at UCSF and SFGH. That’s a total of 25 men and women who have since fanned out across the country, where they head academic programs of their own. He can recite a long list of major U.S. cities where former fellows are working.

“That is what I am most proud of, to have so many trainees in major institutions, where they are making significant contributions to the field of male reconstructive surgery and trauma,” he said. “They are the ones really taking the field forward.”

McAninch grew up on a small ranch and attended Texas Tech and the University of Idaho with the intention of getting a doctorate in animal husbandry. But he realized he was good at the basic science he was taking as part of his interest in animal nutrition, and he decided to apply to medical school, which he completed at the University of Texas Medical Branch at Galveston.

The field of genitourinary trauma and reconstruction was an obscure one when McAninch started his surgical career, and few academic programs specialized in the field. But there was a clear need for this expertise. When McAninch started his urology residency at Letterman Army Hospital in San Francisco in 1964 the hospital’s patients included many Vietnam servicemen whose pelvic wounds required complex reconstructive techniques.

“Reconstruction is a very refined surgical procedure that is challenging, both in decision-making and technique,” said McAninch. Trauma adds yet another dimension. “You aren’t able to plan ahead. Sometimes what you find isn’t what you’d planned on,” said McAninch.  “You have to ask yourself ‘what’s the next best step to take?’”

Helping residents and fellows learn how to climb that surgical decision tree is one of the things he most enjoys about teaching.

Interest in this surgical subspecialty continues to grow, said McAninch, perhaps because male genitourinary reconstruction remains open surgery, without the robotics and endoscopes that are so prominent in other arenas.

“It’s all still scalpel and scissors and not likely to change anytime soon,” said McAninch.

Dr. McAninch was honored at gala “family reunion” at the San Francisco Marine’s Memorial Club, attended by 23 of the 25 fellows he has trained during his career. Held on March 28, 2014, the event was preceded by a day-long educational seminar.