Nadia Roan, PhD, has been named assistant professor-in-residence with the department of urology. 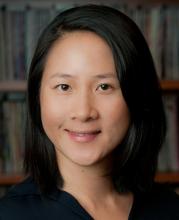 This promotion title is unique to the University of California and awarded to persons who "will contribute with distinction in the areas of teaching, research, University and public service, and professional competence and activities.” Indeed, her promising research explores how factors within mucosal tissues, including seminal plasma components, influence the infection efficiency of human immunodeficiency virus (HIV).  This is the latest in a series of research projects she has conducted on how host factors interact with microbes in the genital tract.

Roan is investigating how the semen components she has identified and characterized, called amyloids, promote HIV transmission. She previously demonstrated that semen amyloids help HIV attach to cellular targets. More recently, she found that semen amyloids may also induce inflammation, which can increase susceptibility to HIV infection. Roan is also examining how these amyloids alter the effectiveness of anti-HIV microbicides that are used to reduce the risk of infection, and is screening for compounds that can inhibit the ability of semen amyloids to enhance infection.  The long-range goal of this work is better understand the molecular components influencing the likelihood of HIV transmission, and to help develop a new class of microbicides that target both HIV and the naturally occurring factors in semen that promote HIV infectivity and viral replication.

In a second line of investigation, Roan is working to understand the role semen amyloids and other seminal plasma components play in human reproduction. She has found that peptides that produce amyloids are present in a variety of non-human primates, and that semen amyloids affect sperm function. Understanding the role semen components play in reproduction may lead to new ways to enhance fertility or to new methods of contraception.

Roan is also a visiting investigator at the Gladstone Institute for Virology and Immunology, where she had initiated much of her HIV research under the mentorship of Dr. Warner Greene.  She has been interested for many years in understanding the effects of host factors on microbial pathogens of the genital mucosa, first studying this process in the most common sexually transmitted bacterium, Chlamydia trachomatis, and then transitioning to the study of HIV.  Roan completed her doctorate in biological and biomedical sciences at Harvard Medical School and received her undergraduate degree in molecular and cellular biology at UC Berkeley.  She has received many awards throughout her professional career, most recently the 2014 UCSF Resource Allocation Program grant, the 2013 Hellman Family Award for Early-Career Faculty, the 2012 Early Career Award of Excellence in Basic Research from the Centers for AIDS Research, the 2012 Gladstone Institute of Virology and Immunology Award for Scientific Excellence, and the NIH K99 Pathway to Independence Award.

Says Peter R. Carroll, MD, MPH, “We are pleased to have Nadia join our robust research team.  Her research into understanding how HIV establishes infection in mucosal tissues, and her investigations into novel approaches of preventing HIV transmission, shows great promise.  Nadia is a brilliant young investigator.”