A Grateful Mother and Child 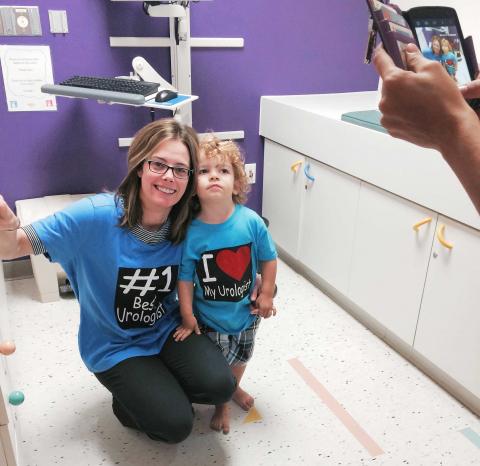 The day after Alice Middleton’s son Caleb was born three years ago, he was sent to UCSF Benioff Children’s Hospital in Oakland due to a heart murmur and a urological condition known as hypospadias.  In the neonatal intensive care unit, the murmur went away on its own; the hypospadias was another matter.  Caleb was referred to Hillary Copp, MD, MS, a pediatric urologist who practices at both the UCSF main campus and at Children’s.

“On that first visit, she took so much time with us,” Middleton said.  “I was afraid, but she gave me printouts and explained everything.”

Copp recommended surgery for the condition, which often entails a curved penis with the urethral opening on its underside between the head and the base.  “Caleb had a fairly severe form, so we decided to stage his surgeries,” said Copp.  “The first was to straighten the penis and get everything ready for the second stage, which was to build the urethra up so it opened at the tip of the penis.”

Caleb has now had three surgeries and his prognosis is excellent.  “He’ll have a normal-looking penis and should have normal sexual function when he’s older,” Copp said.

Middleton said that Caleb’s doing well and enjoys fishing and camping near their home in Sacramento.  “He only takes about a week to recover after surgeries,” she said. “Then he’s back to his normal crazy self.  I’m really grateful to Dr. Copp; she’s like a member of our family now.”

Copp returned the compliment.  “They’re so great, so gracious,” she said. “They’re a wonderful family and have done an amazing job taking all of this in stride.”