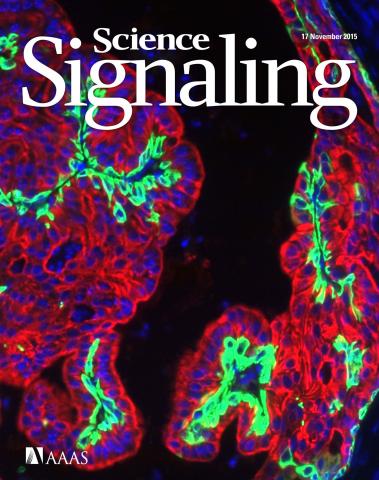 UCSF urology faculty member Davide Ruggero, PhD, and colleagues recently reported on a mechanism that may help explain how prostate cancers develop resistance to drugs that block tumor growth. Their work was highlighted in a cover story in the November 17, 2015 issue of the online journal Science Signaling. Ruggero, who codirects the Prostate Cancer Developmental Research Program at UCSF, has worked for a number of years on a signaling pathway that is activated in prostate and other cancers.  Drugs that inhibit this PI3K-AKT-mTOR pathway are promising, but prostate tumor cells tend to develop resistance to the drugs over time.  This work suggests one way drug resistance may occur, said Ruggero.

Cancer can affect two different types of epithelial cells in the prostate: luminal secretory cells that line the gland and the basal cells beneath them. Working in a mouse model, researchers found that less protein synthesis occurred in luminal cells than basal cells.  That makes them more resistant to drug therapies, which target protein production.  The research further showed that the rate of protein production is dictated by a key regulator called 4EBP1, which controls the translation of mRNA into protein. In cells where 4EBP1 was higher, protein synthesis rates were lower. With less protein present, drug therapy was less effective.

In additional work, the research team found that decreasing the amount of 4EBP1 reversed resistance in drug-insensitive cells.  Importantly, the research team has also shown that increased 4EBP1 is a common feature in prostate cancer patients who did not respond to treatment with a PI3K pathway inhibitor called BKM120.

“The finding is exciting in several ways.  We discovered that these different cell types, luminal and basal epithelial cells, differed in their response to drug therapy because they make proteins at different rates. We had not expected to find that difference,” said Ruggero.

“This research shows us why drugs that target the important PI3K signaling pathway are not working as well as we had hoped they would.  We are in the process of developing new therapies that modulate PI3K pathway and 4EBP1 activity to achieve better clinical therapeutic response in prostate cancer,” said Ruggero.