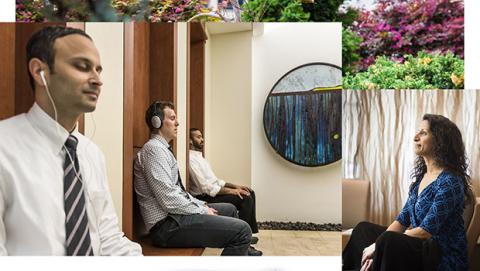 The study, which is designed to enroll 100 patients over the next six months, is open to men and women undergoing radical cystectomy, radical or partial nephrectomy, or radical prostatectomy at UCSF. Half of the patients will be asked to listen once a day to a 23-minute auditory guided imagery meditation (mp3 file) by Marty Rossman, MD, to help them visualize their tumor being removed and their body healing after surgery. The other study participants will serve as a control group, preparing as they normally would for surgery without receiving the meditation file.  Both groups will complete five electronic questionnaires over a six-week period before and after surgery. The questionnaires will measure anxiety, stress, sleep quality, depression and overall quality of life, said Brajtbord.

There has been relatively little research on guided imagery for stress reduction in major oncologic surgery. However, studies in breast cancer patients have found that similar forms of meditation helped to reduce anxiety, said Brajtbord. Reducing anxiety may not only make patients more comfortable, but may also affect recovery. Some research has suggested that chronic stress can promote cancer growth and progression, possibly from elevations in hormones such as norepinephrine and cortisol, which can fuel cancer growth.

Brajtbord became interested in the benefits of meditation when he began practicing it himself during medical school.  “I’ve seen some of the benefits personally, and when I began my residency, I wanted to explore how it might be useful to my patients, “ he said.

“Patients who are scheduled for surgery often ask what they can do to help prepare.  We tell them to eat well and perhaps lose some weight, but we haven’t had anything to offer for the stress and anxiety that come with cancer surgery,” said Brajtbord.

The study is part of Bratjbord’s fifth year of urology residency at UCSF, which is devoted to research.  He designed the project with the help of faculty at the Osher Center for Integrative Medicine at UCSF, including oncologist Anand Dhruva, MD, and integrative medicine specialist Sanjay Reddy, MD.

“We have much to learn about the role that guided imagery and meditation can play in cancer care,” said Brajtbord. “We hope this study will add to our understanding of how it may help our patients.”