The 2016 Emil A. Tanagho Visiting Professor 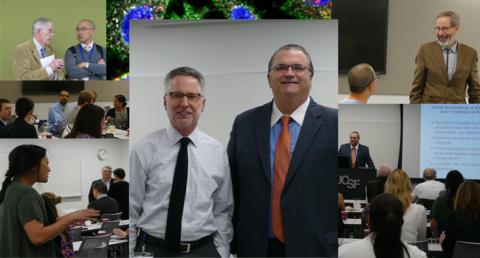 Dr. Partin is well-known in urology circles particularly given his expertise in assessing prognosis and making predictions for men with prostate cancer. The creation of The Partin Tables, which can predict with 95 percent accuracy a man's likelihood of being cured by treatment, made his research famous. His laboratories have investigated multiple new "PSA-like" serum tests, many of which have subsequently become available for clinical utilization.  He is the author or co-author of more than 550 scientific articles, serves on numerous editorial boards and is editor-in-chief of Urology Case Reports and editor of the Campbell-Walsh urology text. He has been honored with many awards, including the Hopkins Young Investigators Award, the Pfizer Scholars in Urology Award in 1996, and the "Gold- Cystoscope" award in 2001.

Fun fact: Dr. Partin received his undergraduate degree in chemistry from the University of Mississippi where he was also an Academic All-American football player.