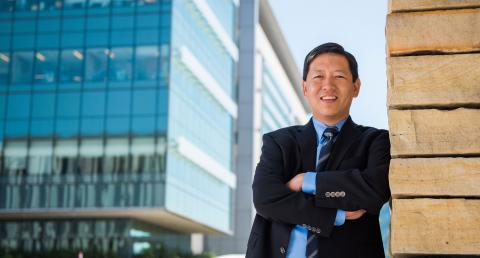 University of Michigan, received a joint position as Associate Professor of Radiation Oncology, Urology, and Medicine. Along with his clinical role, he is also appointed as Vice Chair for Faculty Development and Director of Translational Research, Department of Radiation Oncology.

Dr. Feng received his undergraduate training from Stanford University, where he earned a degree in Biological Sciences and received a President’s Award for Academic Excellence. He went on to receive his MD from Washington University in St. Louis, where he received numerous awards for his research and academic achievements.  He completed both a postdoctoral research fellowship and his residency in radiation oncology at the University of Michigan, and subsequently joined the faculty there.

Dr. Feng’s clinical interests include the diagnosis and management of genitourinary malignancies.  He specializes in the treatment of high-risk aggressive prostate cancers as well as oligometastatic disease.  For upfront or post-surgical treatment for patients, his therapeutic approaches include intensity-modulated radiation therapy as well as stereotactic ablative radiotherapy, among many others.  Dr. Feng is nationally known for his approaches of using molecular biomarkers to help guide or personalize radiation therapy for patients.  He serves as the leader of the Genitouirnary Cancer Translational Research Program for the NRG Clinical Trials Group, and is a member of the National Cancer Institute Steering Committee for Genitourinary Cancers.  He has helped conduct numerous clinical trials, and is the co-principal investigator of one of the first biomarker-driven clinical trials for patients with metastatic prostate cancer.

Dr. Feng is also a physician-scientist focused on clinical and translational research aimed at improving outcomes for patients with prostate cancer. His laboratory will focus on identifying and validating biomarkers associated with treatment resistance in prostate cancer patients, and overcoming radiation or hormone therapy resistance with targeted therapy.  He has published over 130 peer-reviewed scientific articles, and his major contributions to the medical field include: 1) the development of novel molecular subtyping approaches to distinguish biological subgroups of prostate cancer that differ in treatment response, 2) identification of new drivers of aggressive prostate cancer; 3) the development of novel therapeutic approaches to treat prostate cancer.  He has published manuscripts in leading journals such as the New England Journal of Medicine, Lancet Oncology, Journal of Clinical Oncology, European Urology, Nature, and Nature Genetics.  He has received numerous awards for his research and is the principal investigator on multiple grants, from various federal and foundation sources.