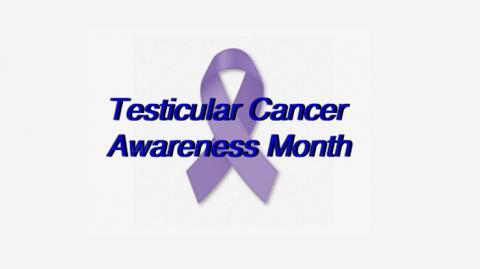 The testicles are two egg-shaped structures with a firm, slightly spongy feel located below the penis in the sac of loose skin called the scrotum.  The size of the testicles should be roughly the same.  Two main functions of the testicles include sperm and testosterone production.  Tumors of the testicle are relatively rare malignancies, accounting for 1-2% of cancers among US men, with an incidence of approximately 5.4 out of 100,000 men per year. However, it remains one of the most commoncancers in young men.

“Many testicular tumors are initially diagnosed after self-discovery of a firm mass in the testis,”  explains Maxwell Meng, MD, UCSF Urology Professor and Chief of Urology Oncology, “There is usually an enlargement of one or both testicles, possibly associated with some pain but often there are not any other bothersome symptoms.”

This was the case with Nathan Adrian, the American competitive swimmer and 8-time Olympic medalist.  “I first noticed a bit of pain in my testicle when I brushed up against it, and upon inspection realized it was hard and swollen. After a few days the pain went away, however, the swelling and hardness continued so I went in to see my primary care physician. He then got me on track with an ultrasound the next day and a follow-up with a Urologist shortly after.”

Once a positive diagnosis is made via ultrasound, the decision can be made to move forward with treatment, “the initial step is almost always removal of the entire testis,” says Dr. Meng, “but there are ways that men can stillpreserve fertility and testosterone production.”

Removing the testicular tumor and its affected testicle, is called a radical orchiectomy.  It is accomplished through a small incision in the groin.  This procedure is performed for definitive diagnosis and staging, but also it can also be a highly effective and a curative treatment.

After radical orchiectomy, based on an individual’s cancer type and stage, the next step may be monitoring or more treatment. If the decision is surveillance, it will require periodic blood tests and x-ray tests.  If further treatments are required, it can involve additional surgery, radiation, or chemotherapy.  “It really depends on the specific patient,” says Dr. Meng.  “Here at UCSF, we deploy a team approach - multidisciplinary care with experience!”

This team approach was important to Adrian, “Working with Dr. Meng was absolutely incredible. He has all the qualities you would want in a doctor. His credentials speak for themselves regarding surgery and being one of the very best surgeons in the world. Beyond that, however, he is willing to take the time to explain and discuss everything relevant to your disease in a manner that is both patient and understanding.   He also has an amazing team that he works with (oncology, fertility, etc.) that were all great doctors (and humans) as well.”

Early Discovery and Treatment Are Key

“The good news for testicular cancer patients” says Sima Porten, MD, MPH, “is that an effective strategy employing surgery, with chemotherapy, radiation, or surveillance, in an appropriate manner individualized for each patient has produced cure rates between 95-99%, while minimizing side effects of treatment when possible.  Regular self-testicular exams are key to early discovery and treatment.”

Nathan Adrian concurs, “It is incredibly important for all men to be tested and self-test. Even though testicular cancer is largely treatable, if we can get all men to self-test once a month we could save a lot of lives and a lot of unnecessary chemotherapy. I also feel strongly that the men need to understand that going to the doctor will only help. All of the doctors that I have seen have stories about men that have known they have a problem but wait because testicular cancer is largely pain free in the beginning. Many men wait until they have debilitating back pain or are coughing up blood from metastatic disease to finally go in and figure out what is wrong.”