Dr. Blelloch appeared on the BBC to discuss his latest work.  Click below to listen to the interview. 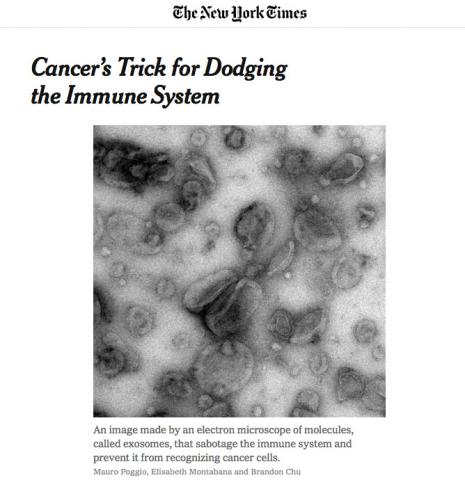 titled, Cancer’s Trick for Dodging the Immune System.  The original research, published in the journal Cell can be found here http://tinyurl.com/y4nqnxcp  Click here for the mention in the NIH Director's Blog.

New research shows that some cancers resist the latest immunotherapies and remain invisible to the immune system because they deploy molecular saboteur that infiltrate the body’s immune command centers and switch off its cancer-detecting machinery.

These stealthy saboteurs — which had so far eluded scientists — were finally detected by a team at UCSF, who will report their discovery the journal Cell this week. In addition to offering a surprising explanation for why immunotherapy works poorly in some cancers, the work points the way to a promising new way to unleash the immune system against disease.

But some cancers, such as prostate cancer, have remained stubbornly resistant to treatment with checkpoint inhibitors, and the UCSF’s team’s new findings may help explain why.

Rather than displaying checkpoint proteins on their surface, the cancer cells studied by the UCSF scientists instead ship these proteins out of the cell in molecular freighters called exosomes. When they reach lymph nodes, where immune cells are primed to attack cancer, the checkpoint proteins turn off the immune response—before the immune cells have even had a chance to deploy.

And when checkpoint proteins are packed into exosomes, immunotherapy drugs can’t touch them.

But the study also sounds a more hopeful note: the researchers found that cancers that deploy this defense — prostate and colorectal cancer — can be made vulnerable to the immune system and to immunotherapy if the cancer cells’ ability to make exosomes is disrupted, even temporarily. Once the immune system has “seen” the cancer deprived of its exosome defense, it goes on the attack, and this response remains in place, continuing to protect against the cancer.