Hypospadias results from incomplete development of the urethra (the tube that carries urine from the bladder to the tip of the penis).  Where the opening is along the shaft of the penis determines how severe the condition is.  The opening can form on the undersurface of the penile shaft in any position from the tip of the penis to the scrotum (see figure 1: classification of hypospadias).  It is fairly common and affects 1 in 30 - 250 males in the US.  It can be associated with curvature and incomplete foreskin.  Eight to fourteen percent of boys with hypospadias have another family member with hypospadias.  It is corrected by surgery and it is best to perform surgery after 3-6 months of age.

How is hypospadias
diagnosed?

Hypospadias is usually diagnosed at birth.  It is very difficult to diagnose it during pregnancy on ultrasound.  It is identified on physical exam in the more mild form when the foreskin does not look completely normal, and in the more severe form when the opening of the penis is not in its normal location.

How is hypospadias treated?

All boys with hypospadias do not require surgery, the very mild cases will not have a major impact on a child’s life but some parents will still opt for surgery for cosmetic reasons. There is no alternative to surgery to correct the opening or the curvature of the penis.  Surgery is usually a one-time event.  However the more severe cases sometimes require a second surgery.  There are three main goals of the surgery which include: bringing the opening of the urethra to the tip of the penis, correcting curvature of the penis, if it is present, and improving the appearance of the penis.

Depending on the severity, if left untreated it can interfere with sexual intercourse and fertility secondary to the curvature that is often seen with hypospadias. The position of the opening determines how well the sperm is delivered to the cervix (opening to the uterus in females).  It can also make it difficult to stand to urinate.

What should you expect with surgery?

Surgery lasts 2-3 hours and is performed with a general anesthetic and local anesthetic (direct block to the penis or through a caudal block).  It is an outpatient surgery (come and go on the same day) and most children will go home with a bandage and a catheter in the penis.  The catheter will drain directly into the diaper and will usually be removed 7-10 days after surgery in the clinic.  (See the Figure 2 below) 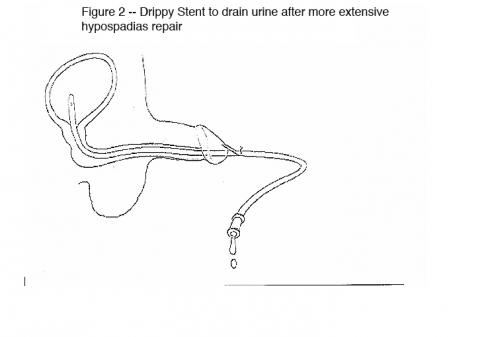