Medicine today generates vast amounts of patient information, but figuring out what it all means can be a dizzying task. A new member of the Department of Urology, Mark Bridge, is working in the emerging field of data science, building tools to see patterns in the facts and figures gathered in the course of patient care.

Bridge officially joined the department in April 2015, but he has been working with the clinical and research teams in various capacities for five years. He focuses primarily on the data UCSF gathers on men with prostate cancer.

A native of Chicago who moved to London when he was seven, Bridge completed a masters degree in computer science at the University of London. As an undergraduate he studied anthropology, which supplied a viewpoint that has helped him approach the task of data analysis.

“That anthropological perspective really helps you focus your work. You try to concentrate on the end-user—patients—and what will be useful to them,” he said. 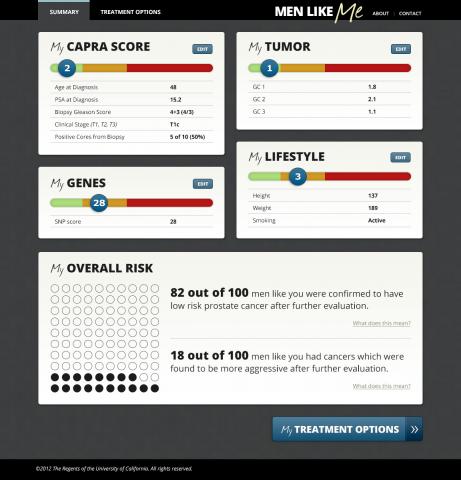 Twenty years ago, the department helped create the UCSF Cancer of the Prostate Strategic Urologic Research Endeavor (CaPSURE) database, which tracks men treated for prostate cancer. CaPSURE now includes 15,000 participants at over 43 community, academic and Veterans Administration sites in the United States. The Urological Outcomes Database (UODB) at UCSF follows approximately 5,000 patients treated for prostate cancer at UCSF.  Together these databases track such medical and lifestyle points as the grade and stage of a man’s tumor, his family history of cancer, laboratory and pathology reports, sexual function and urinary continence. This information is often augmented by an individual’s electronic medical record. Even personal electronic devices are a data source, with apps that can log everything from a man’s pulse rate to how many episodes of incontinence he experiences in a day.

“The current strategy is to connect as much data as we can, and make sense of it along the way,” said Bridge.

One way to make data usable is the creation of personalized reports comparing one patient’s potential outcomes to results from other’s with similar medical profiles.

New data storage methods have made it easier to discern patterns in large amounts of data. Earlier computer data systems created relational databases that stored information in tables. Although useful in many ways, this tabular format made it hard to adjust areas of interest midway through a research project.  Now graph databases are used that allow scientists to add new “nodes” of interest and relational lines between them, much as in building a family tree.

The data is then analyzed with machine learning, an analysis tool first developed to mimic how the human brain learns from experience. In machine learning, networked computers churn their way through data, detecting patterns, based on a complex, constant tuning of probabilities.

Analysis is faster and less expensive today with the practice of chunking data into small jobs that employ thousands of individual processers, then aggregating the information.  Called parallel processing, it is many thousands of times faster than crunching data on a single computing platform.

Software systems also have the potential to connect UCSF with still larger data sets, such as those of other UC campuses and the American Urological Association Quality Registry (AQUA), which includes urology practices across the country.

And what happens when any patterns are detected? The urology team can then test those in a carefully structured clinical trial—still the “gold standard” in research, said Bridge.

“Our goal is to unlock all this data and give the information back to patients in a way that is tailored to their particular situation,” said Bridge.

A patient portal will be tested shortly, that is designed to provide patient-specific information in a user-friendly fashion. Bridge also wants to help the UCSF team develop more ways that patients can connect to help motivate each other in making lifestyle changes, such modifying their diet or increasing their level of exercise. “Gamification” offers possibilities to make it easy for men to support each other in that effort.

The thought of the work ahead could seem daunting, but Bridge appears to draw energy from the many possible ways he can help to advance men’s health.

“Mark is a rare find in the field of I.T,” said Matthew Cooperberg, MD, MPH, one of the urologists who relies on his expertise. “He is knowledgeable, flexible, and he has come to care deeply about improving the lives of patients with urologic diseases. We all count ourselves very fortunate to have successfully recruited him to join us.”