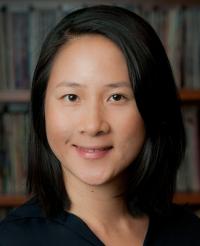 Nadia Roan, PhD, received her undergraduate training from the University of California Berkeley, where she graduated with an honors degree in Molecular and Cellular Biology. She then completed her PhD in the Biological and Biomedical Sciences Program at Harvard Medical School studying T cell responses to the bacterium Chlamydia trachomatis. She conducted her postdoctoral studies at the J. David Gladstone Institutes located at University of California San Francisco (UCSF), where she studied the mechanisms by which host factors in human semen influence HIV infection. As a Staff Scientist at Gladstone, she further identified and characterized novel factors from semen that influence infection outcome. As head of her own lab in the Department of Urology at UCSF, she continued to study the relationship between semen factors and HIV transmission, and pursued research to more broadly understand the molecular basis by which HIV establishes infection in mucosal tissues. Dr. Roan is currently an Associate Professor at UCSF, and the current research focus of her lab is to use single-cell analytical approaches including mass cytometry to characterize the molecular basis of cellular susceptibility to HIV infection and pathogenesis, and to identify signatures of infectious and reproductive diseases in humans.

Dr. Roan has had a long-standing interest in understanding the effect of host factors on microbial pathogens of the genital mucosa. Her current research focuses in three major areas:

First, she is investigating the molecular basis by which small amounts of HIV can initiate infection in the mucosa. Her lab has discovered that genital and rectal fibroblasts, amongst the most abundant cells of the mucosa, potently increase HIV infection of T cells. In contrast to fibroblasts, mucosal epithelial cells, which line the mucosa, inhibit HIV infection by apically secreting antiviral factors. These findings suggest that abrasions in the genital and rectal epithelium may increase HIV transmission in part by allowing HIV to escape an antiviral environment to access the infection-favorable environment of the stromal fibroblasts. Ongoing research in the lab seeks to determine the molecular mechanisms by which stromal fibroblasts increase HIV infection of T cells, and conversely the mechanisms by which mucosal epithelial cells limit infection rates, using ex vivo tissue models. The effects of seminal plasma components, which the lab previously demonstrated markedly enhance HIV infection, along with sex steroids and microbicide candidates, are also being investigated in these model systems.

Second, she is using mass cytometry to characterize susceptibility of cells to latent and productive infection by HIV. Her lab conducted a 38-parameter characterization of HIV entry and productive infection of tissue CD4+ T cells by mass cytometry, and used an analytical approach that takes advantage of the high-dimensional nature of CyTOF datasets to distinguish receptors modulated during infection from those differentially expressed on preferentially infected cells. These studies identified a subset of memory CD4+ T cells susceptible to HIV entry but not productive infection. Ongoing work in the lab seeks to characterize the molecular basis of this post-entry restriction, and to use CyTOF and a variety of high-dimensional CyTOF data analysis tools to characterize the types of cells that are productively and latently infected with HIV.

Lastly, Dr. Roan is investigating how various components of human seminal plasma can affect infection by STDs and fertility. Semen, in contrast to other human bodily fluids, contains multiple types of amyloid fibrils under non-diseased conditions. Dr. Roan previously demonstrated that these fibrils potently enhance infection by HIV and other sexually transmitted viruses, and characterized the mechanisms by which they do so. The lab is conducting studies to characterize the physiological function of these fibrils, by assessing how they signal to sperm cells and cells of the female reproductive tract. The effects of seminal plasma components other than semen fibrils are also being characterized both for their effects on HIV infection and reproductive health, as well as to serve as biomarkers of human disease.

Postdoctoral fellows and graduate students who have experience in microbiology and/or immunology are encouraged to apply for postdoctoral training in the lab of Dr. Nadia Roan. Interested applicants should send their CV and names of three references to: [email protected]