Urology faculty member Robert Blelloch, MD, PhD, is leading an NIH-funded project examining the role extracellular RNA (exRNA) might play in prostate and other cancers. Within the cell, RNA helps to guide protein production, but scientists have learned in recent years that small segments of RNA are also found in blood and body fluids, where their role is not well understood. 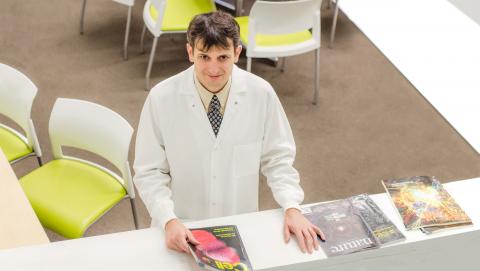 Robert Blelloch, MD, PhD
Blelloch’s lab at UCSF has been exploring exRNA for the past several years and found a correlation between the presence of exRNA and a commonly used prostate cancer risk asssessment score (the UCSF CAPRA). Working with Matthew Cooperberg, MD, MPH, and Peter Carroll, MD, MPH, Blelloch’s team subsequently examined exRNA in men who were eligible for active surveillance, but underwent prostatectomy. Some of the men were found to have more severe disease than predicted at initial diagnosis, and a preliminary study has found that in those patients, specific exRNA levels were increased prior to surgery.  This finding might lead to a new biomarker for the severity of prostate cancer or possibly even a new treatment approach, if exRNA is found to be fueling tumor growth.

Blelloch, who was recently named vice chair of basic research for the department of urology, says the work fits well with UCSF’s mission to advance precision medicine.  “Research like this is part of our effort to better define each individual’s tumor, so we can precisely target which patients are good candidates for active surveillance and which need more aggressive treatment,” said Blelloch.